One of the things I always look forward to whenever I visit my hometown is the early morning walk that leads to this river on a mountain. It is a breathtaking retreat from a busy life miles away. The silence is beautifully broken by the steady flow of the water which brings about a certain calmness to the mind and readiness to face a new day. 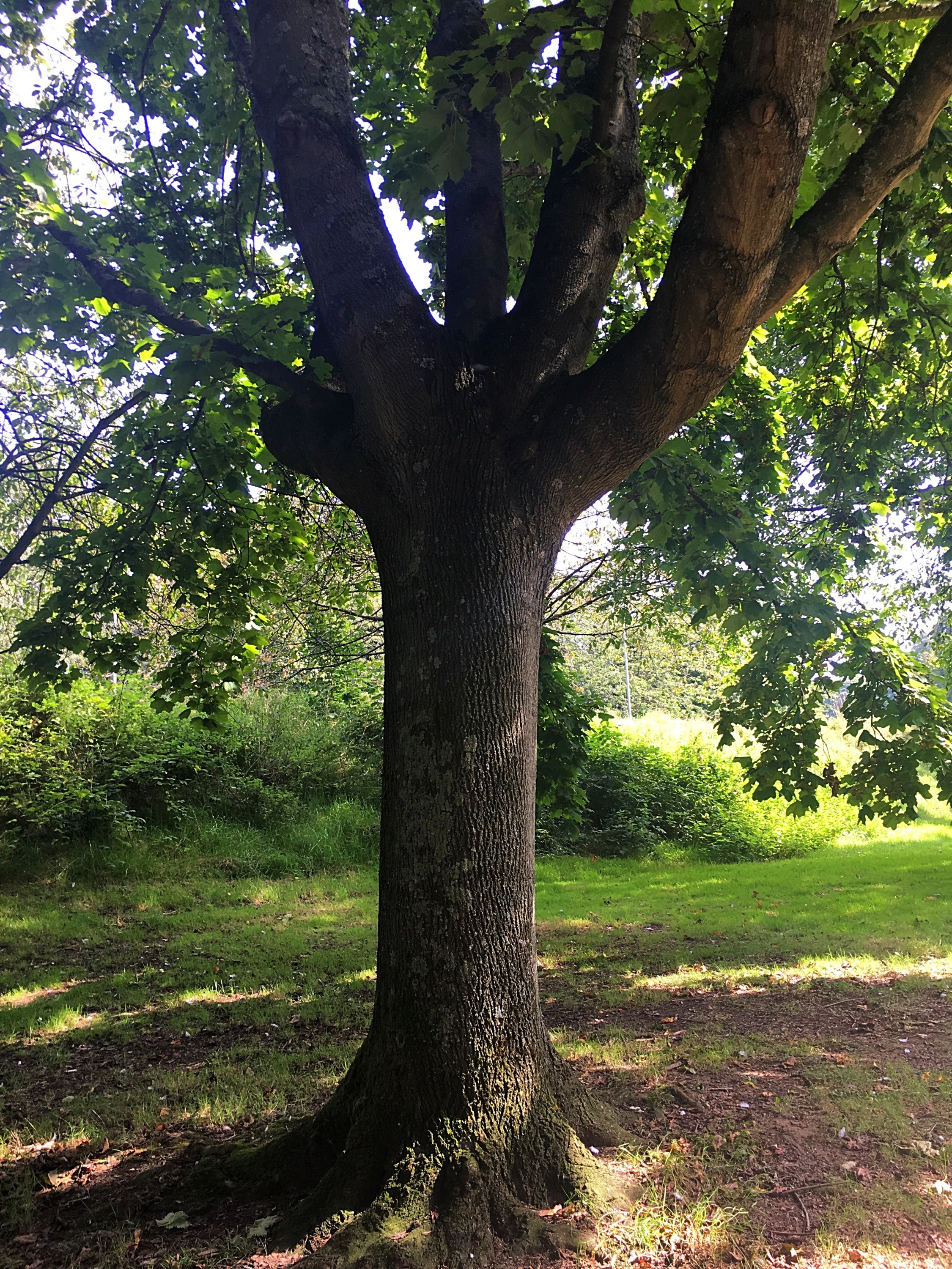 I am that tree

my hands are free

my roots have spread

my reign, in depth

the sky, this ground

my cradle, my turf.

The Promenade and The Pier

the view of the pier from the promenade

It was on a whim and a last-minute family decision to travel to North Wales and explore Llandudno which then turned out to be a pleasant discovery of an old-fashioned coastal town in a first-world country.

After an exhausting but uneventful six-hour drive from the South of England, we arrived at our hotel that was conveniently situated on the seafront and just a few steps away from the scenic Llandudno Promenade. The whole vista was indeed a welcome sight to behold!

It got my expectations of the town all hyped-up. 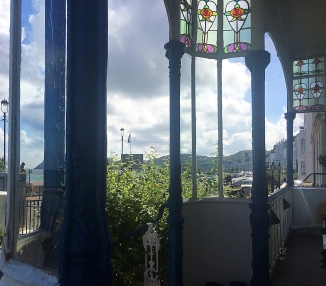 main entrance of the hotel

Determined to make the most of our short stay, we were at the promenade just as soon as we have unpacked. Our leisurely walk along the pebbled shore was accompanied by the intermittent squawking of flying seagulls. They seemed to be everywhere and spontaneously appearing out of nowhere! Well, that was an inevitability we have had to accept. These seabirds were bound to be visible in their natural habitat and territory. 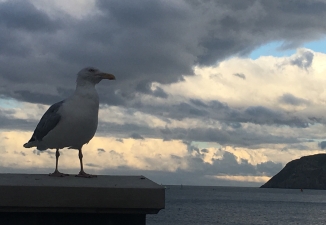 seagulls were everywhere and they squawked a lot!

We then came across a sandy part of the beach when we realised we’ve reached the mouth of Llandudno Pier. A waft of freshly baked donuts filled the air. They were a temptation one couldn’t say no to.

We gobbled up our donuts with gusto as we made our way towards the end of the pier. Noticeably audible as we plodded on was the familiar sound of country music. Hmmm. Definitely American. And so, there it was; a stall selling music CDs of just that! (yes, CDs. I did say ‘old-fashioned, right?)

I would say that it is rather a rarity in England to hear this music genre.

Before settling abroad,  I lived in a place in the Philippines listening to the likes of Johnny Cash and George Strait. To have been able to listen to them again in a pier in far-away Llandudno brought wonderful memories of home. 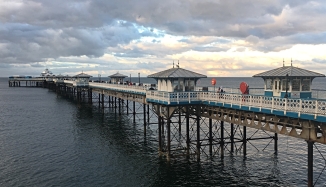 Llandudno pier, the longest in Wales

Midway into the pier was a mini kiddie fair where families with young children got fascinated with the rides and games on offer. Llandudno is also a definite if you are looking for a family-friendly summer retreat.

The panoramic view of the Llandudno coast from the longest pier in Wales was worth the trip. A glimpse of old hotel buildings lined up along the seaside is quite a landmark. No wonder Llandudno attracts a lot of visitors, old and young alike.

The same can be said about the view from a reasonably-priced boat ride that we took the next day.

Regrettably, the famous cable cars were not operational due to the windy weather.

A summer night stroll has revealed that Elvis Presley is a common favourite in Llandudno. Many hotels that we have passed by featured a nightly entertainment of an Elvis impersonation…his music, his moves, attire and all.

And guess what? Our hotel did, too.

Our room was above the entertainment hall and as it was an old building, we could actually hear the reverberating sound of ‘Jailhouse Rock’ as we slept and looked forward to another summer day in Llandudno. 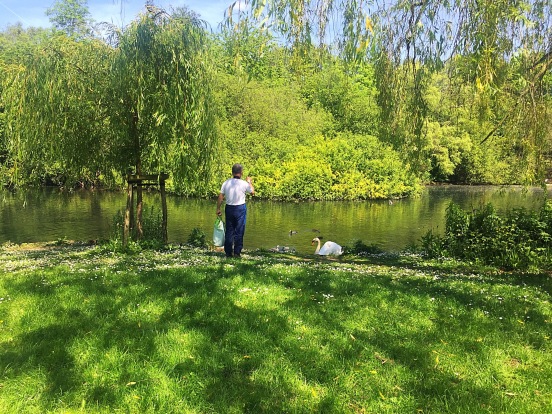 The weather may be muggy today but it’s tempting not to stay indoors. So I decided to drive around and take photos of the town where I’ve lived for the last 13 years. Then I met Bernie. This is his story.

My stopover was in a park with a large pond near my home. It must have been my lucky day! I just spotted a pair of swans frolicking in the water. What a good photo that would make!

Then I noticed that it was also someone else’s lucky day. He was not only clicking away with a camera slung around his neck but seemed to be chatting with the swans, too. Interesting!

As I approached nearer, I found the man feeding the swans and their cygnets with grass. Sensing my curiosity he explained, “They do eat grass but not any kind. They must be hand-cut and I’ve just given them dandelions. Try feeding them with that (pointing to the grass on the ground) and they will only spit it out.”

Here’s more: he must have read my mind. “The colour of the beak of the male is dark orange. The female beak is also orange but lighter.

They used to have nine cygnets. One of them died and the other got injured so it  was taken away.”

I thought, “Oh wow, carbs and veg, good for you swan.”

“I come here everyday”, he continued. I guess my face looks familiar to them. But I would not mess with them during the mating season. The male, especially, can become aggressive. “He hit my hand with his wing once and it put me out of action for four days!”

He then pointed to a heron perched on the concrete in the middle of the pond.

He got amused with the coots trying to grab their share of the bread. He threw in some more. I thought, “carbs and veg, good for you, ducks!”

Finally, I found the chance to ask him his name. ‘Bernie’.

Bernie is an amiable old man. (Even the wild swans took to him, right?) The lines on his face reflect a happy human being.

Not only did he impart valuable ‘swan wisdom’ but also taught me how to identify the variety of birds residing in the pond. More importantly, Bernie gave my photos more meaning.

I have been to this pond several times but today was a chance encounter with a man who has a genuinely good heart. Indeed this was a lucky day!  I know I will see Bernie again one of these days. I drove away with a smile.

Here is The second story in one day.

I live and breathe

I play and seek

Keypads, the tube and minecraft

The raft, an oar and nature

My furlough, my solace 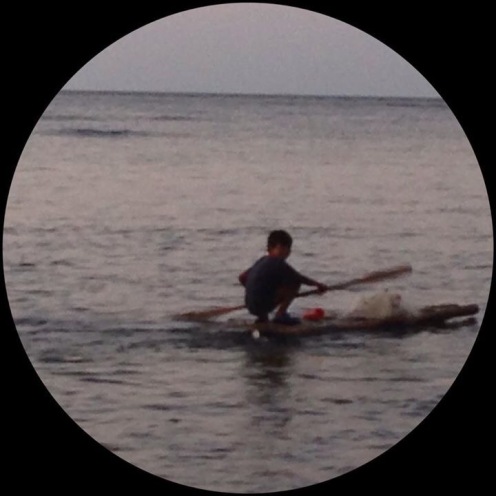 This corner of the world, I reign

I cruise, fearless and happy

In this home I own.

Judge me not, you see

My life is not less

but beautiful and free! 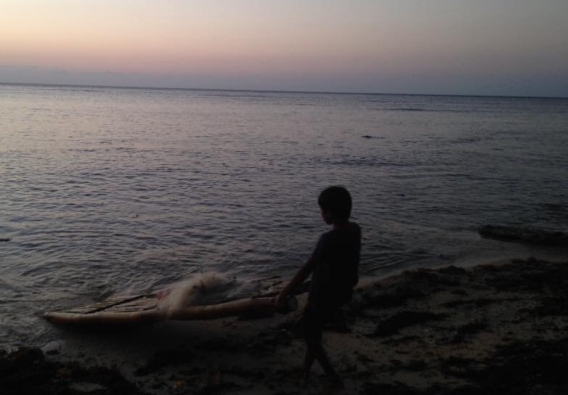